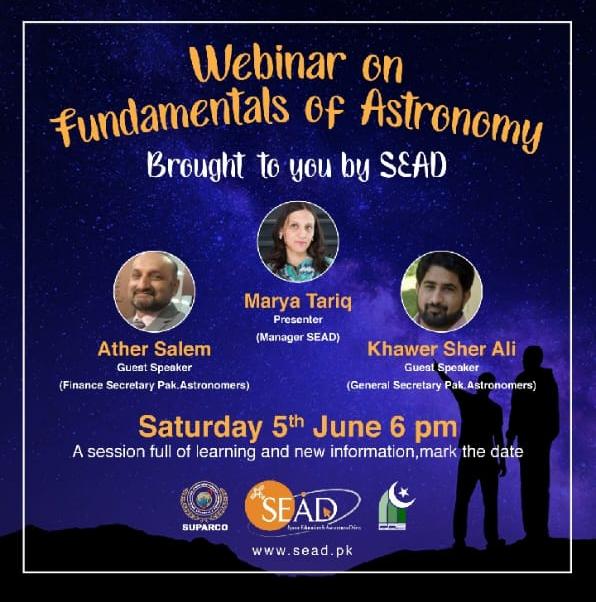 On 5th June, 2021, Space Education And Awareness Drive SEAD, an initiatie by SUPARCO organized a webinar for the benefit of children. The Webinar was broadcast live from the SEAD Facebook Page. The event was attended by several university and school going students. The host of the webinar was the manager of SEAD Program in Islamabad. The webinar was attended by senior members of Pak Astronomers Islamabad, as well as Khawar Ali Sher, who was also representing PAS Islamabad.

As astronomy is a relitively unknown concept in Pakistan, therefore the participants of the Webinar begin by describing the fundamentals of astronomy. Mr Athar Saleem, the finance secretary of Pak Astronomers demonstrated that by using simple equipment such as a mobile device we can learn a about the night sky and the movement of stars and the planets.

Using applications such as Google Sky we can learn about the names of the objects that are visible at the night sky at the time. If we have simple astronomy equipment such as binoculars available with us, then using just a simple smart phone and a bino we can observe a number of objects in the night sky. Especially objects such as nebulae, star clusters and the surface features of the moon can be observed using binoculars.

Adding to the discussion, Khawar Sher spoke about how astronomy was shaping up in Pakistan. Especially how Islamabad Astronomy activity is picking up. The participants and anchor also discussed how in the near future a number of astronomy related events are being planned in Islamabad, Pakistan.